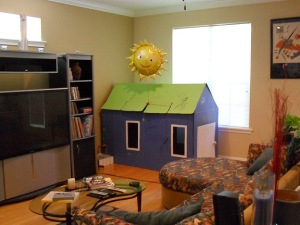 I’ve know Chad for a little while, Dani (who is Agi’s brother) for a little while, and Stephanie for about a day so far. My car is still being worked on so I am lucky to be camping out here. Their place is one block away from Stardust so I am well within walking distance. 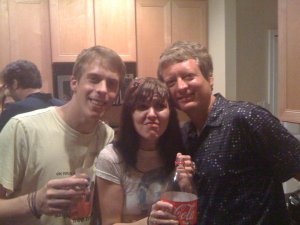 Oh look! Here they are! This is from the night before during their party. Stephanie appears to have drank something horrid or is suffering from very bad gas. Dani told me I could stay at there house for three years. I think he might have had some booziness going on. I’ll probably only stay 3 days instead… but thank you. 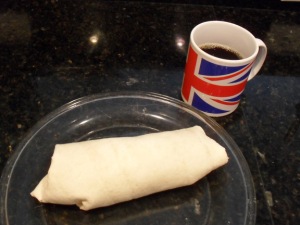 This morning Chad made some vegi wrap things with spinach, apples, almond slices and other stuff. Very nice! I had coffee in coveted British mug. Chad had a lot of Union Jacked stuff in his house. I’m getting the idea he is a fan of the British. 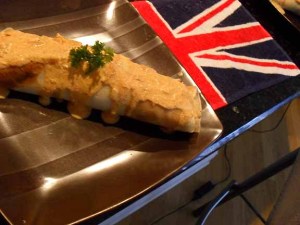 A couple days later, Dani made something called… hold on, I wrote this down…   Okay, here it is: Hortobagyi Palacsinta. It’s a sort of Hungarian crepe with chicken and sauce and was quite amazing. Thanks Dani! 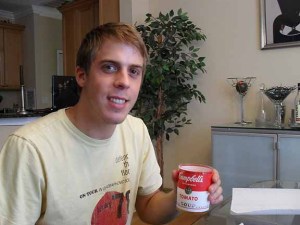 Speaking of Dani, here he is! He is drinking coffee out of a soup can for some reason. Hungarian is the hardest language to understand. 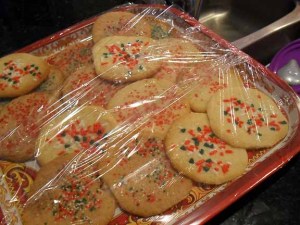 Part three of the food trio is Stephanie who made a lovely tray of Christmas in July cookies! I had a couple of these with my coffee this morning and went to work. I really liked the varieties of sprinkles. Thanks Steph! 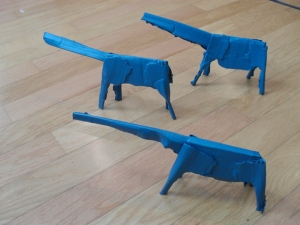 I left them with a trio of long necked, squatie, blue beasties. This was the longest stay I’ve had so far… 11 days. Congratulations to the three of you! It was a real good time and enjoyed everyone’s company. I have my car back so I’m off to someplace a little further.